Subject: RE: Consultation on the Public Right of Way status of four sections of the Old Shap Road

We have received an application from the Cumbria Trail Riders Fellowship to record sections of the Old Shap Road as ‘Byways Open to All Traffic’.  The four sections of this route affected are shown on the enclosed map.

This application has been sent to us as the authority that looks after the rights of way in the National Park.  We maintain and manage the network, but also look after the definitive map – which shows all the footpaths, bridleways, and byways.  This means that we have to investigate any claims that amendments should be made.

I must stress at this point that this application has not come from the Authority, but from the applicant themselves

We have carried out various pieces of research, and it does indeed seem as though the old turnpike road still carries public carriage rights.  However, since the advent of the Natural Environment and Rural Communities Act in 2006, any mechanically propelled vehicular rights (motorbikes, 4x4s) have probably been extinguished – leaving ‘carriage’ to basically mean horse and cart.

It therefore seems as though it is likely that the correct status of the Old Shap Road is a ‘Restricted Byway’ – which means all traffic except that which is mechanically propelled (motor vehicles).

I am hoping to take the matter to our Rights of Way Committee early next year, but before then I would very much appreciate any information or evidence you have as to any of these sections of the Old Shap Road.  Such as, any knowledge of the history of the route, or documents you hold or know about – together with any information as to usage of the route over the last 40-50 years or so – such as whether they have been used by motorbikes, 4x4s, horses, pedal cycles and so on.

The matter will be determined on the evidence, both documentary and user – as to what the public status is.  Issues such as suitability of the route for any particular user, or the desirability of any such use are not matters that we are allowed to take into account.

If you are able to forward any information or your views and responses before the 7th November 2017, it would be very much appreciated.

Many thanks, and I look forward to hearing from you. 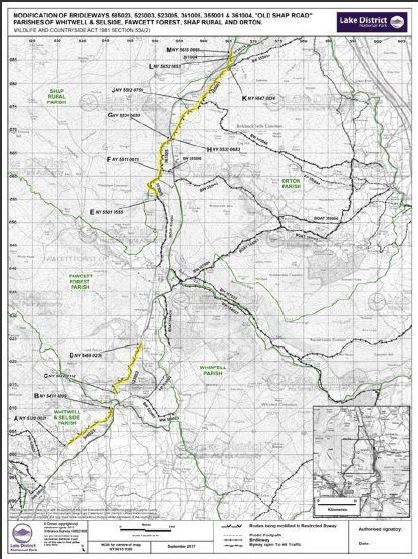