1. This encouraging message scrawled on a steep hill climb. 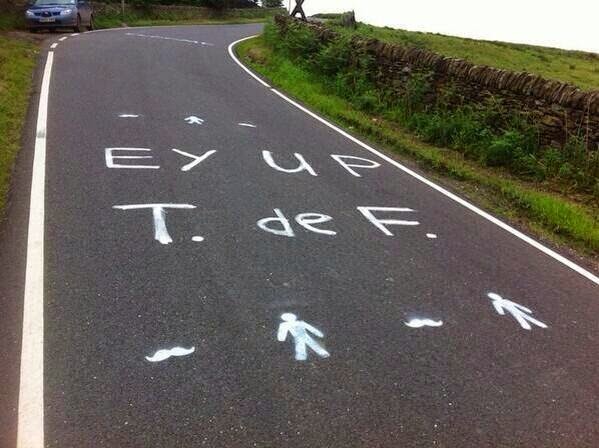 The world’s best cycling race started in Yorkshire and they put on a great show.

Link to the other 28 Brilliant Ways Yorkshire Welcomed The Tour De France.
Posted by Neil at 11:01 am 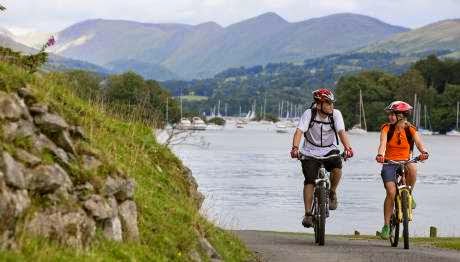 The in-roads to Lake Windermere, especially from the south, are very narrow and cyclists may feel unsafe riding along them with the amount of traffic we have here, so Windermere Lake Cruises have endeavored to make things easier  by running a Bike Bus service from Haverthwaite at the south end and Kelsick Road, Ambleside from the north end with stops along the way at the various attractions. They are also sailing a Bike Boat so that you can cross over to the other side of the lake from Brockhole to Wray Castle boathouse jetty or vice-versa.

With reference to the ride on Sunday 27 July, I’ve been giving this some thought and wish to bring the start time forward to 9.30 at Kendal Leisure Centre.
This will allow a multi length ride for people and options through the day. Pace will be moderate.
In the morning we will head over the Helm and in the direction of Patton Bridge, then heading west, to Staveley – for a break after about 17.5 miles.
Break 1 will be around Wilfs/ Hawkshead Brewery somewhere between 11 and 11.30.
From there we will head south and east, ending up at Sizergh for lunch. Options here are Sizergh Castle tea room; Low Sizergh Barn or the Strickland Arms. This is another 11 or 12 miles depending on which route.
We will head back toward Kendal via Sedgwick, and for people who wish to return to Kendal, the ride will total around 29 – 30 miles by continuing back to the Leisure Centre, arriving back somewhere after 2.00pm
If the weather remains great, and anyone else wishes to extend the route, we will turn east after Sedgwick (off Natland Road), via Crosscrake and Stainton – looping back north via Gatebeck and continue as far as people feel appropriate given weather and time etc before dropping back into Kendal. We may put an afternoon stop in depending on times etc.
People are welcome to join at Staveley or Sizergh if they wish, but please contact me before hand if they intend to do so, so that I know if we need to wait / meet at certain venue / time. (e-mail or text pls)
Huge thanks – hope you had a great weekend – what amazing weather !!
See you soon
Jo
jo@jamie-macdonald.com
mobile: 07834 729951

Last week’s gathering acknowledging Le Tour, was a great success.
Upwards of 40 people turned up at Brian Woodward’s home which he had generously made available for the event.


Brian, together with Chris and Janice Rowley had spent time getting things ready, including the naturally fired barbecue, and people turned up with all sorts of exotic and tasty foods and drinks, many of which had a French or Yorkshire connection. 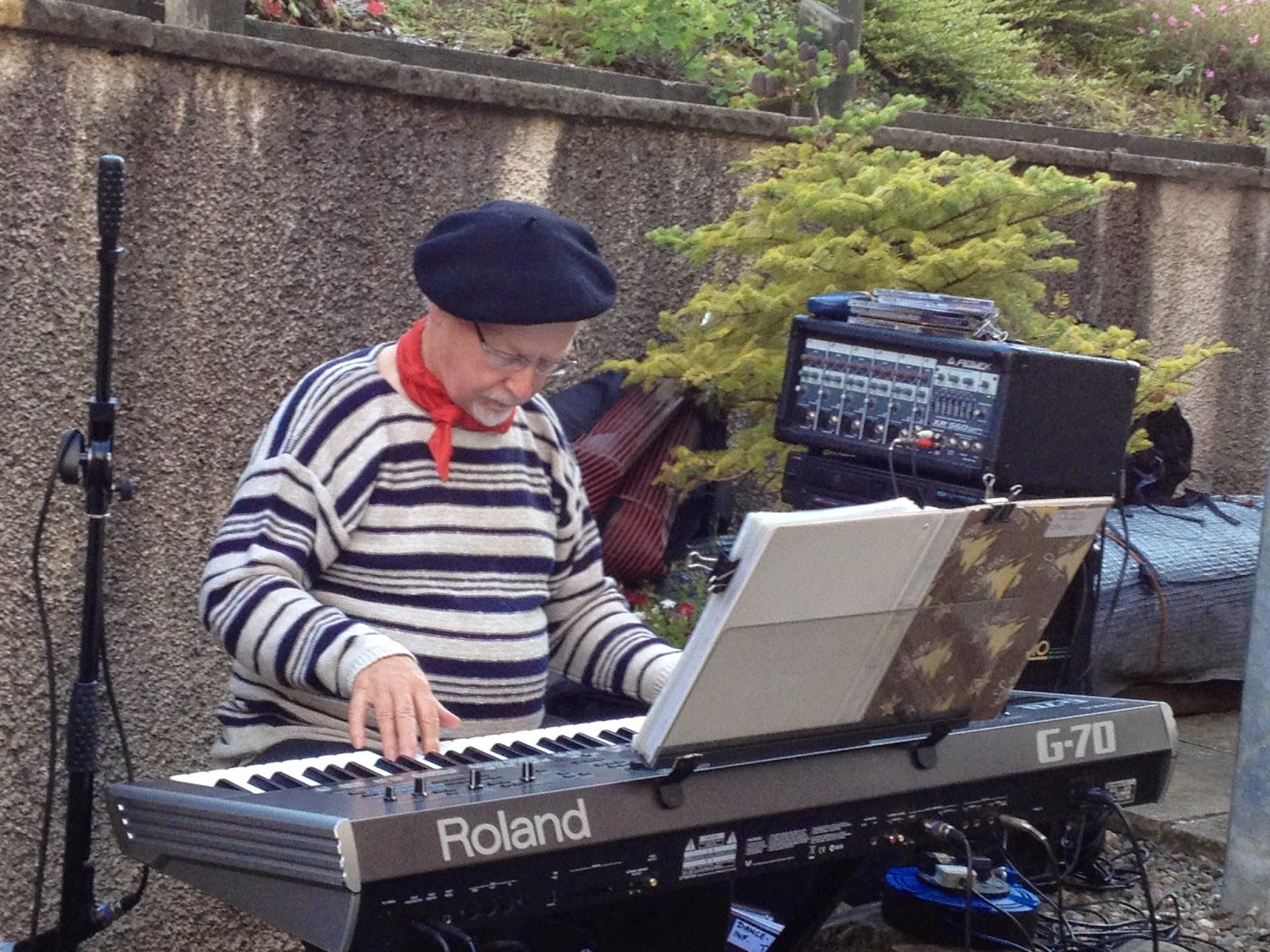 Alan Beecham had transported his keyboard, amp and speakers all the way from Arnside to provide a seamless, musical background with a predominantly French flavour. Dave Wills gave us an interlude on his guitar, which he had brought, at phenomenal expense, all the way from Oxenholme.

In addition to the festivities, we had Special Guest, Mike Dagley, presently the Coordinator of Volunteers for Sustrans. Mike mingled with the group, telling us about progress to establish the Morecambe Bay Cycleway Project, which may involve KDCS people trialling aspects of the route during a period to be arranged later this year. Mike was very pleased that he had made contact with KDCS. It is important that we align with Morecambe Bay Partnership, SLACC and AtoG on cycling projects to have input and give strength to acceptable proposals. Although Mike will shortly be made redundant, we hope to continue the link with Sustrans through Nicky Wingfield. 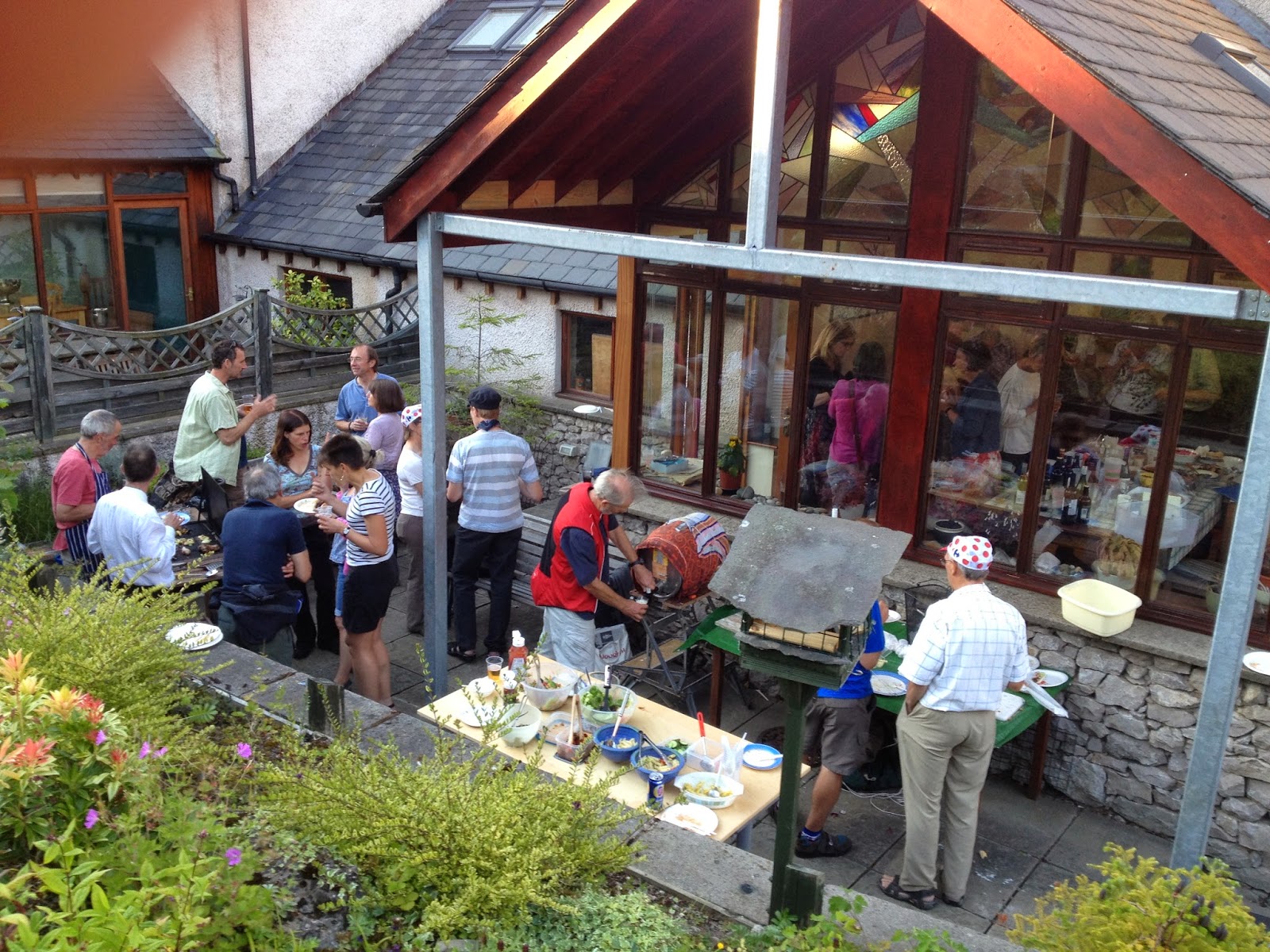 As the evening progressed, the atmosphere became more convivial, and it was noticeable that Chris, manning the hot barbecue, acquired an increasing ruddiness to his cheeks - unless it was rouge? Alan was resplendently attired with beret and cravat, as a matelot of the sort you regularly see frequenting the bars of French fishing villages. Others, who had managed to get a glimpse of Le Tour in Yorkshire were proudly showing off their colourful red spotted caps, yellow T-shirts and other memorabilia. There were one or two ladies whom I did not recognise at first. A number of people asked me how news of our event could have filtered through to the shadier arondissements of Paris...........Alors! The wonder of t’internet! 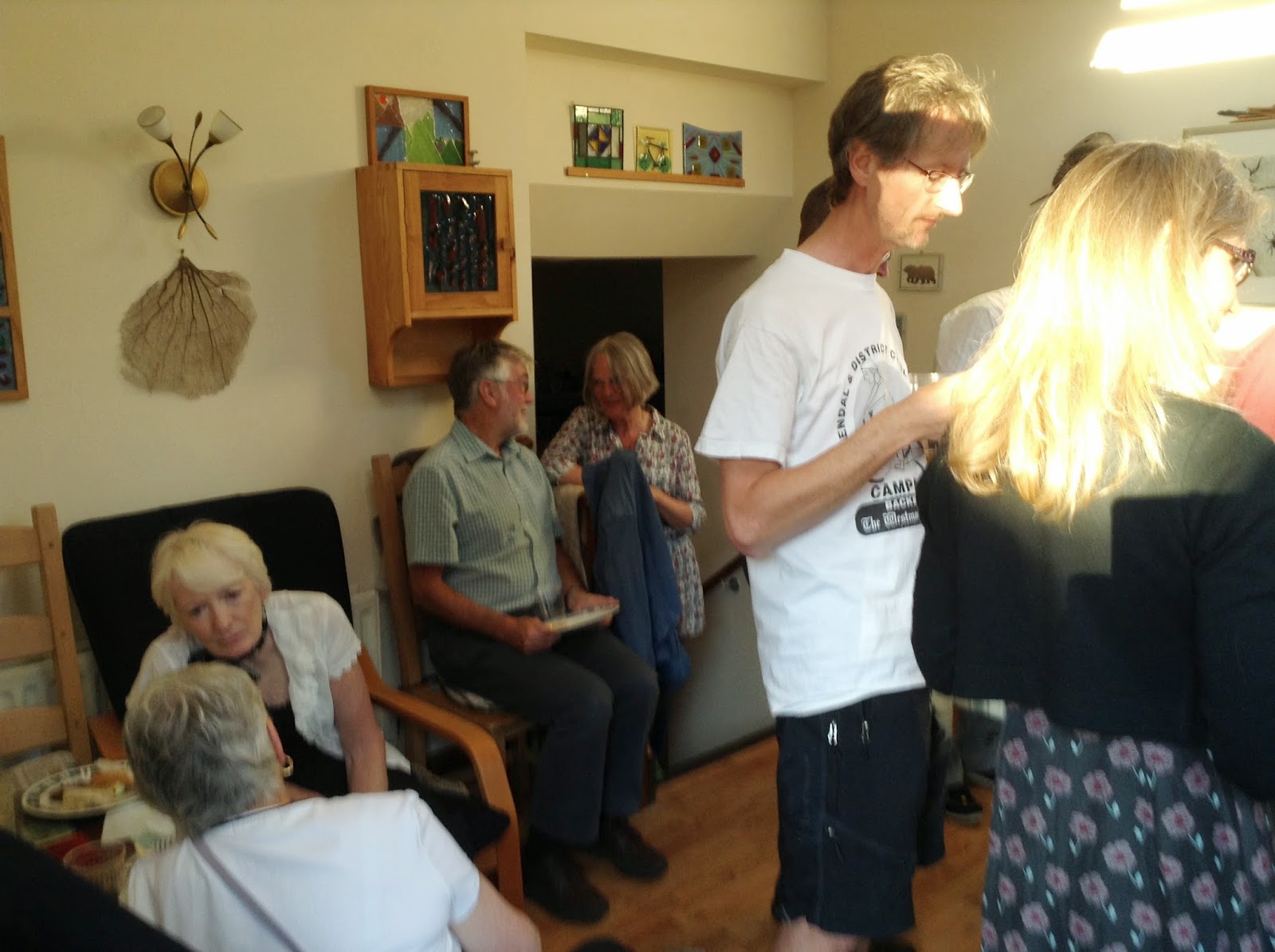 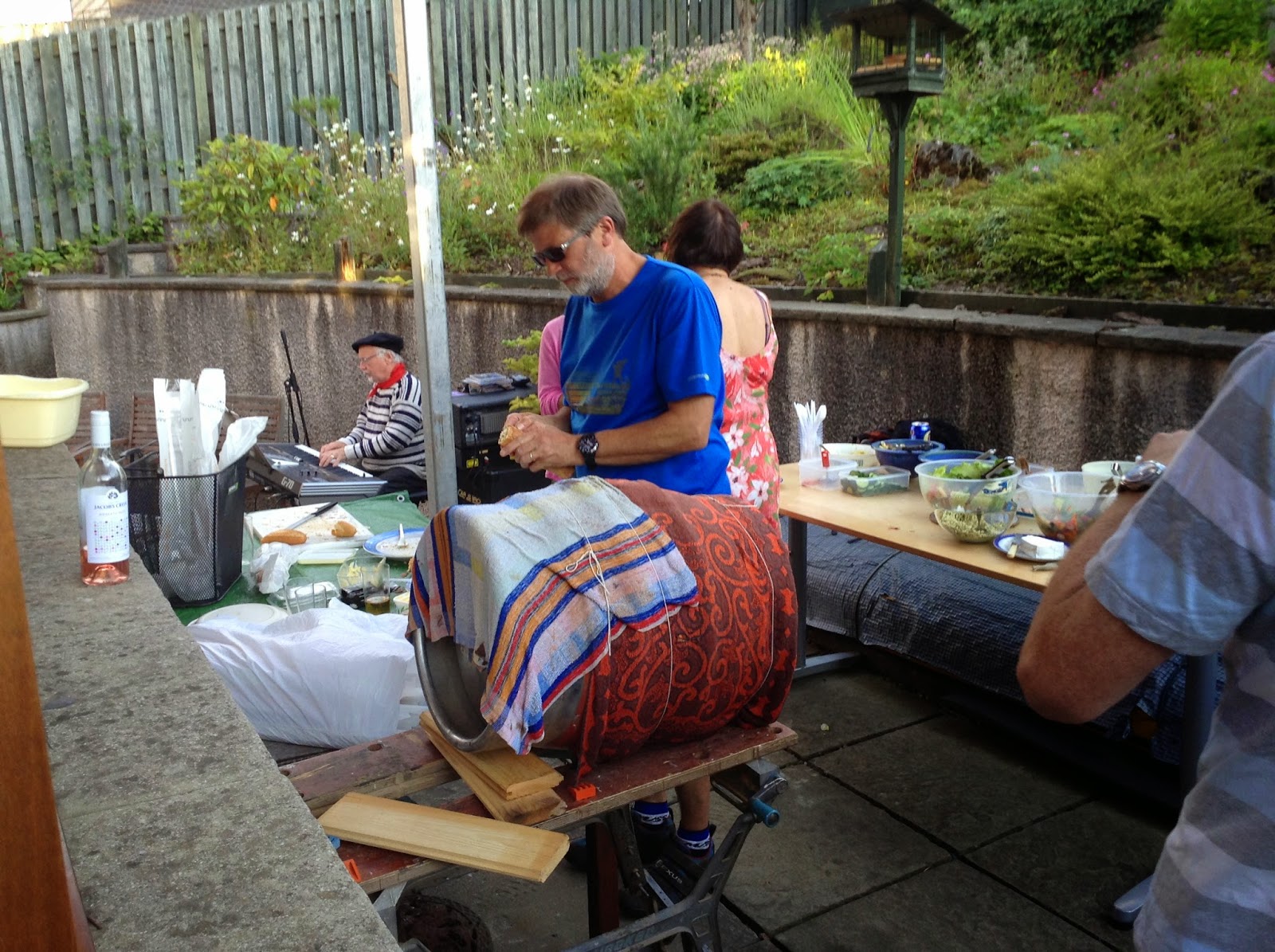 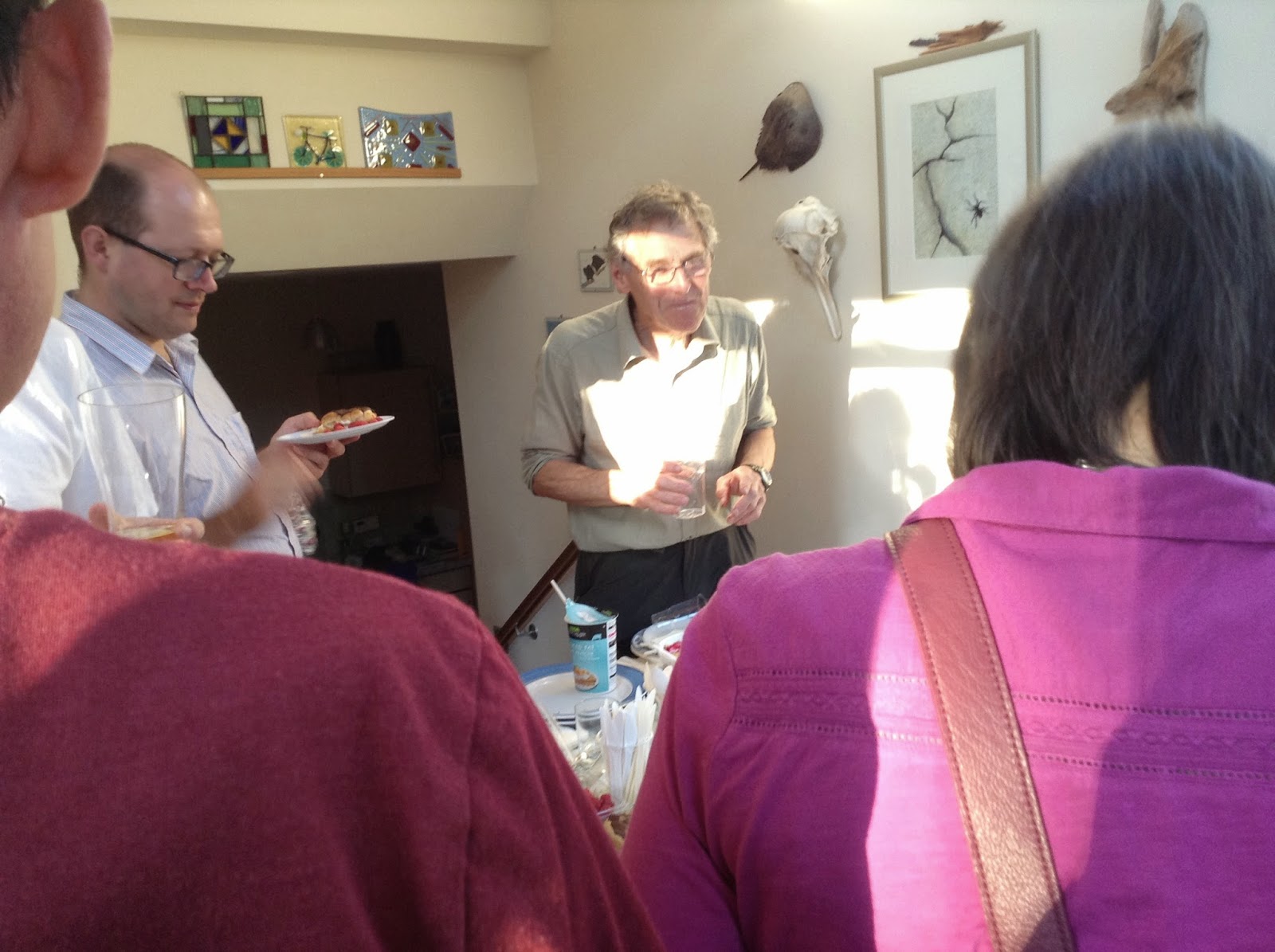 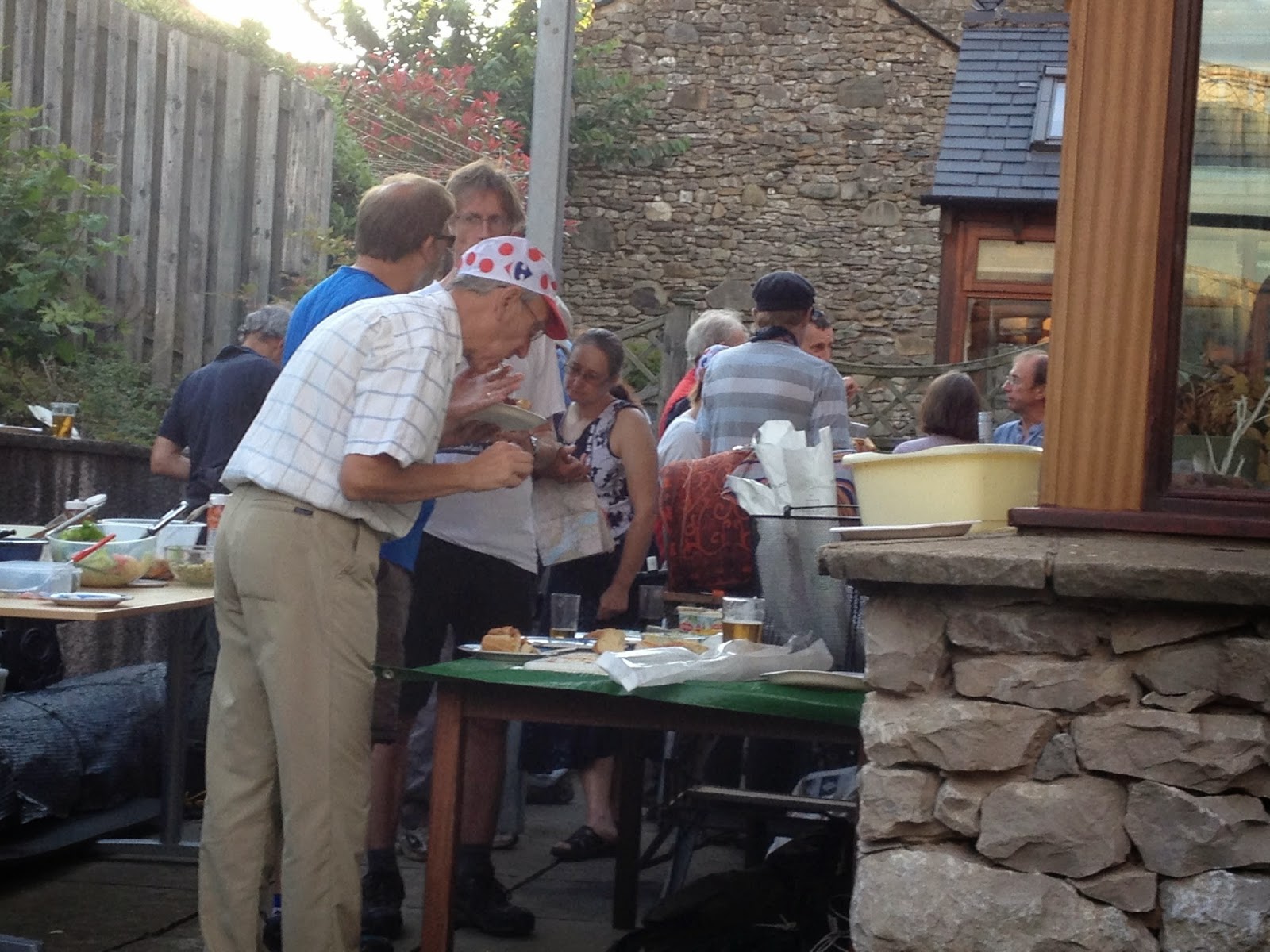 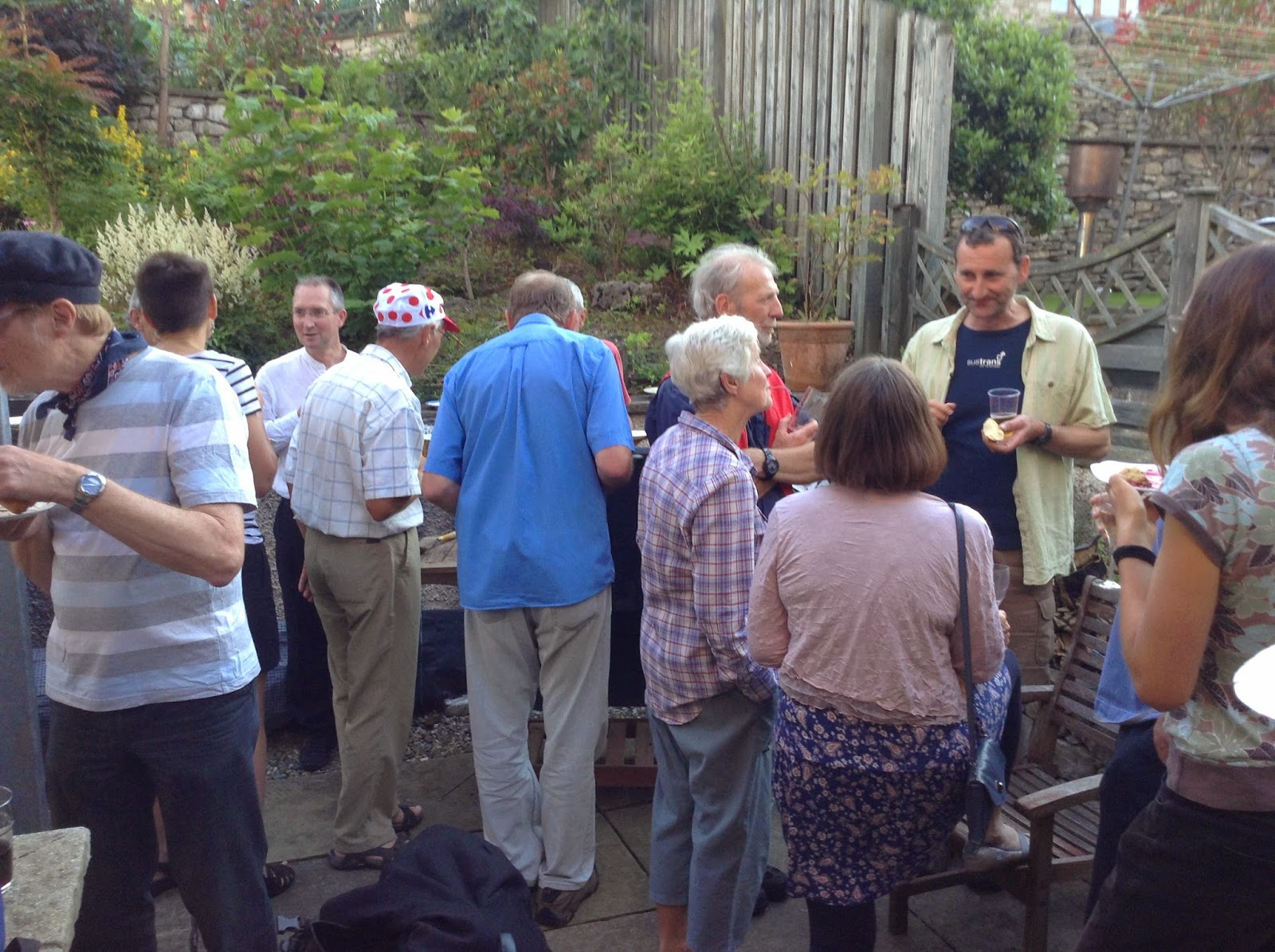 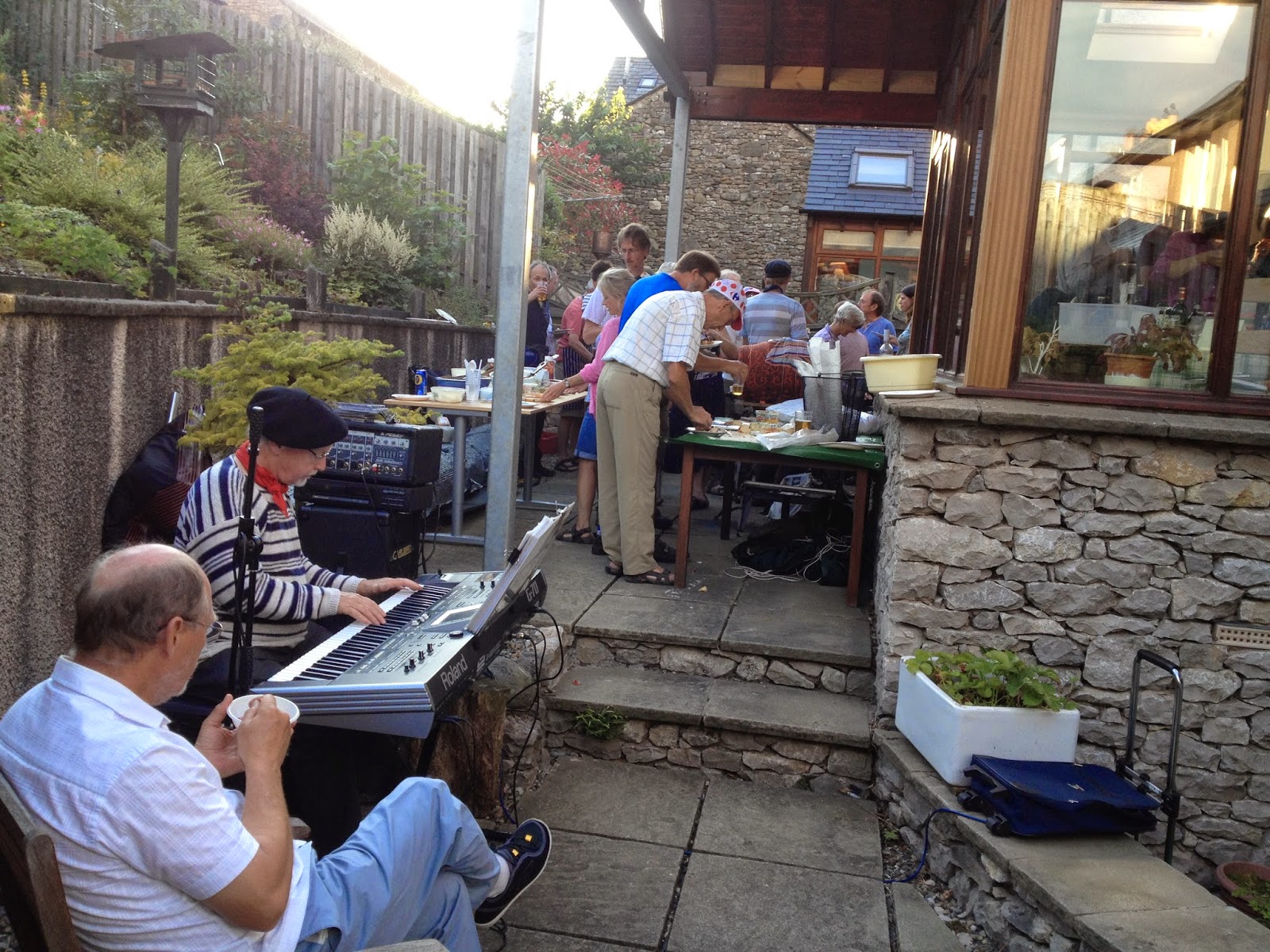 Once again, thanks not only to Brian, Chris, Janice, Alan, Dave, not forgetting Jo and Jamie who loaned us the Barbecue, but also, in the tradition of the Leeds City Varieties, mainly Yourselves!

And finally! As the result of everyone’s generosity, the figure raised for Marie Curie Cancer Care is £260. Many thanks to you all. For a small group, this certainly exceeds expectations. Chris has deposited the money in the Marie Curie Account and I am forwarding a copy of this email to Alison Currie, the local Marie Curie Fundraiser for Lancashire, Cumbria and the Isle of Man. 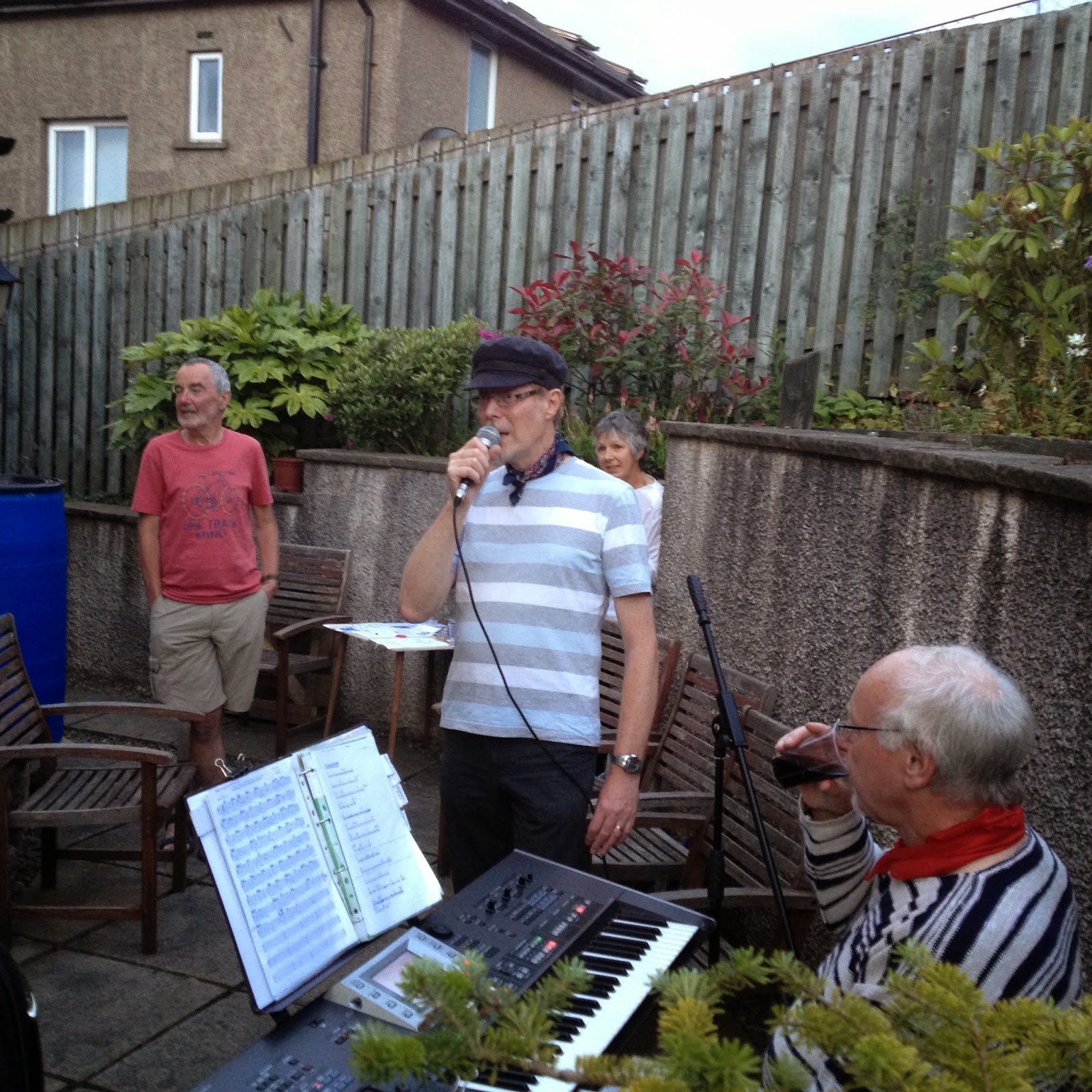