All classes are hands on and delivered in a format that is easy to understand and assumes you have little to no technical knowledge.  They won’t blind you with science and they will explain everything again and again until it’s clicked.  They have handy video’s to show you and plenty of help sheets to take away once you leave the class, and they are only at the end of the phone if you need them. 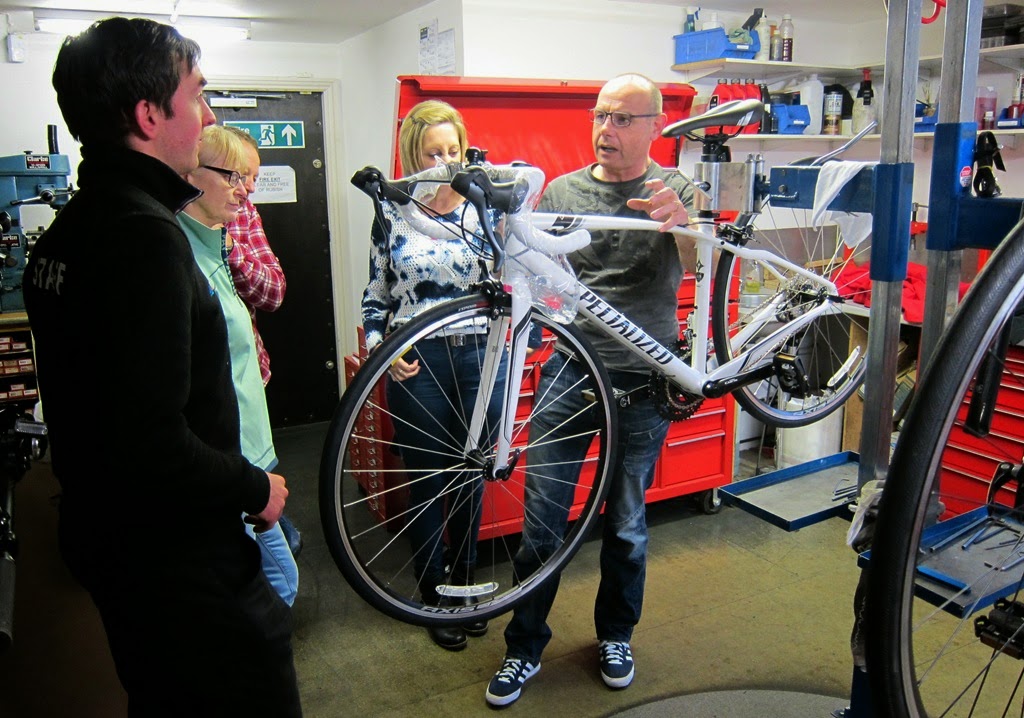 Typically a class is 2 hours long and costs £15 per head and there are generally 4-6 people involved.  As a general guide  run classes on a Sunday 10am to 12pm, but they are flexible if these days do not suit your schedule.  If there is something specific you and a bunch of friends want to learn then they are open to teaching you anything so just get in contact with them to organise something.
So if you want to learn how your bike functions no matter what level you are at then just give them a ring 015394 31245 or  email -  info@bike-treks.co.uk - to arrange a class.

Here are some classes that Biketreks regularly run:
Link  - Biketreks’ Workshop Classes
Posted by Neil at 11:25 am

KDCS have been asked to help promote this fundraising event for Cumbria’s Children’s Hospice and Eden Valley Hospice and have been sent this information .....

On Sunday 24 May, Jigsaw, Cumbria’s Children’s Hospice and Eden ValleyHospice will be hosting our very first fundraising Colour Run event inKendal. The event will take place at Jubilee Part and more informationcan be found on our website,http://cumbriacolourrun.evhospice.org.uk/Over the coming months we want to tell everybody in Cumbria about ourfantastic and colourful fundraising event and we were wondering ifKendal and District Cycle Scene would be able to help us promote theevent.It would be fantastic if you would be able to display our eventposters and leaflets or distribute them to members of yourorganisation. The event will be perfect entertainment for all of thefamily and fundraisers can make a huge difference to the Children’sHospice.I understand that this is a very big ask and I appreciate that you maynot be able to help us on this occasion.Just in case you are wondering what a colour run is, here is a littlebit more information. The Colour Run is a 5km run at Jubilee Park andevery runner will start the race in a white t-shirt. At differentstations around the course the fundraisers will be showered indifferent coloured paint, which will transform them into a rainbow ofcolour. The paint is made from corn starch and cosmetic colourings, whichmakes it safe to use.If you are able to help Jigsaw promote the event or would like anymore information please get in touch and I will be more than happy tohelp.Kind regardsAndrew Maddison CONTACT DETAILSandrew.maddison@edenvallyhospice.co.uk
Posted by Neil at 9:18 pm 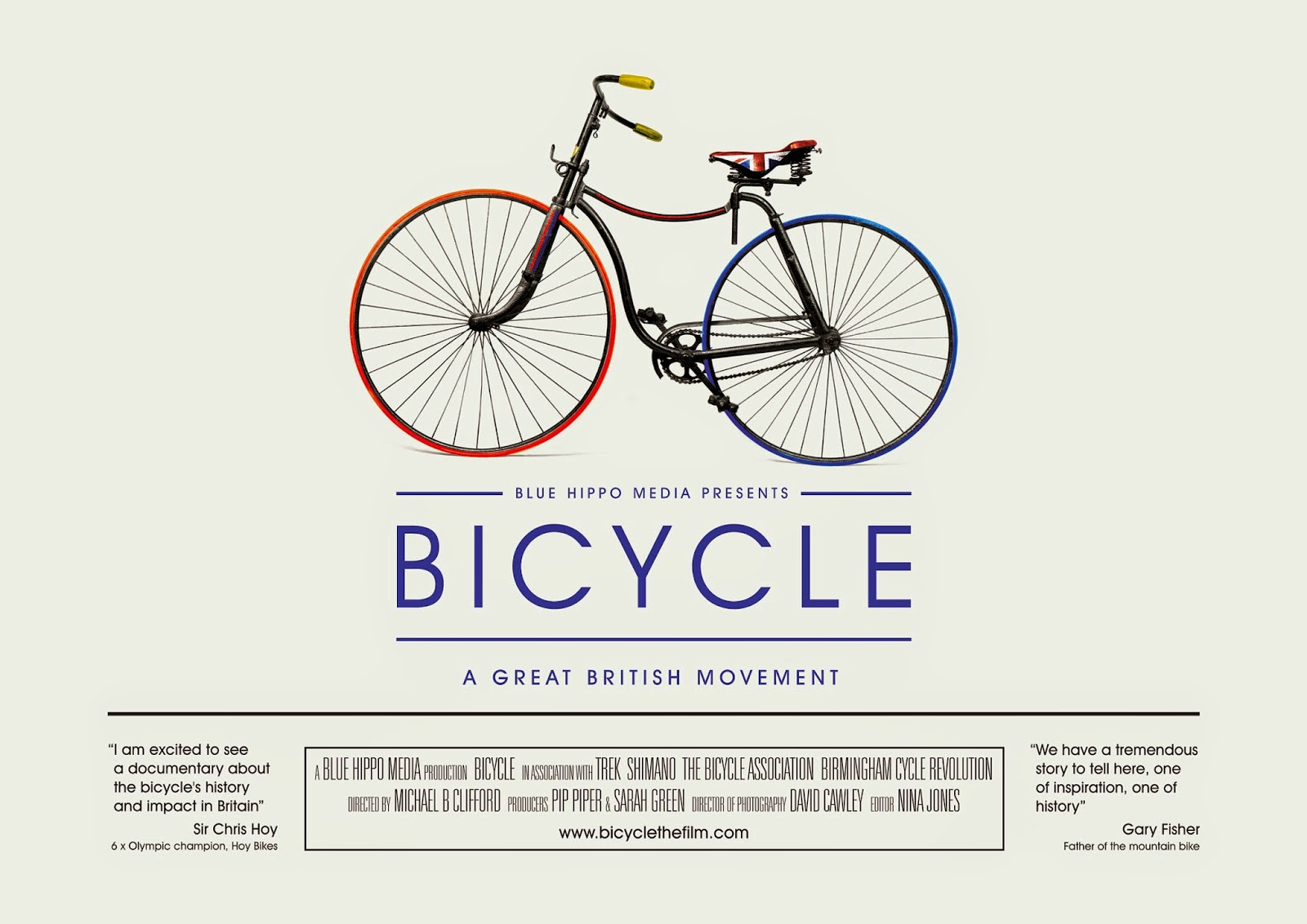 A 90 minute documentary, asks the question why is cycling and the bicycle back in fashion? The film, which is directed by BAFTA winning director and keen cyclist Michael B.Clifford tells the story of cycling in the land that invented the modern bicycle, it’s birth, decline and re birth from Victorian origins to today. The film weaves bicycle design, sport and transport through the retelling of some iconic stories and features interviews with notable contributors Sir Dave Brailsford, Gary Fisher, Chris Boardman, Ned Boulting, Sir Chris Hoy, Tracy Moseley, Mike Burrows and many more plus great archive, animation and music.  “Bicycle” is a humorous, lyrical and warm reflection on the bicycle and cycling and its place in the British national psyche

The film team for ‘‘Bicycle” includes Bafta winning director Michael B Clifford and international award winning film producer Pip Piper of Blue Hippo Media.
Pip’s recent documentary “Last Shop Standing” about the UK’s independent record shops featured Paul Weller, Johnny Marr and Billy Bragg and received wide critical acclaim and was screened around the world.
Rob Penn, broadcaster and author of acclaimed “It’s All About the Bike” is a creative consultant.
The film is being supported by Trek ,Shimano, Bicycle Association and Birmingham Cycle Revolution as our co  headline sponsors .We also have a number of other sponsors and supporters and a large social media audience.We raised 20% of our budget through crowd funding.
The film is completed and  “Bicycle” receives its VIP World Premiere on July 1st 2014 to coincide with the TDF Grand Depart in Yorkshire and then the Public World Premiere is at the Festival of Cycling at Harewood house on July 4th on a giant outdoor screen powered by 12 bicycles!. It will be screened in cinemas across the UK whilst being released on DVD and Digital and Terrestrial TV. Through key media partnerships, PR and a strong social media campaign, the film will reach a very wide audience of cycle enthusiasts and beyond. The film will also travel across many borders reaching a significant audience both in the UK and internationally.

” At a time when the bicycle is back in fashion, it is great to see a film about this beautiful machine coming out “
Chris Boardman MBE  ,Olympic Gold Medallist

“Lyrical, affectionate, beautiful. A hymn of praise to a humble wonder; the bicycle” Ned Boulting, Broadcaster and Writer

” The bicycle has been central in my life even to the point where now i have my own brand of bikes . I am excited to see a documentary about the bicycle’s history and impact in Britain. Sir Chris Hoy  6 x Olympic Champion ( Hoy Bikes )

for the film Bicycle: A Great British Movement will go on sale for a screening at the Brewery very shortly. The screening will take place on Thursday 26 Mar 2015 @ 8pm – a couple of days before the Wheelbase Spring Classic sportive…
Posted by Neil at 4:40 pm

Presentation of the 2014 Cafe award to the staff at Brief Encounter by Peter.
Also in the photos are Anne, Andy and Hilary. 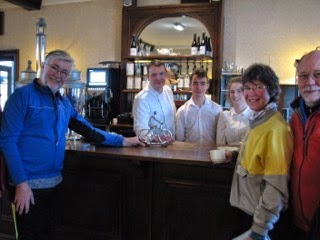 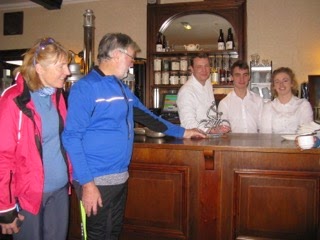