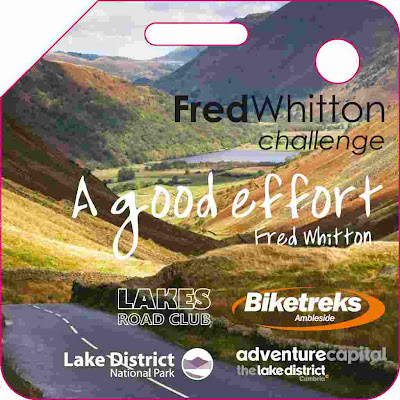 Last Sunday saw around 1000 riders take part in this years Fred Whitton Challenge, the annual 112 mile sportive challenge event was won this year by Rob Jebb with a time of 5.47, and as usual even getting a ride in the event was a challenge in its self, as event entries are oversubscibed very quickly.

The new tour uses state of the art timing facility developed by SORTident UK, making it accessible to those who don't get a place on the annual event, and those who would prefer to take up the challenge at a more leisurely pace.

Monday 12 - Thursday 29 April
For the 5th year running the Dukes and Lancaster's cycling team are running a Bike Film Festival, with a range of films and talks plus a family bike repair day.
EVENTS IN THE RAKE 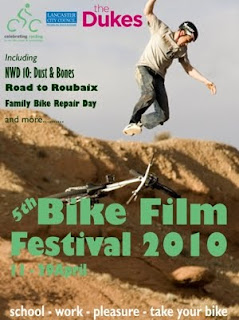 Wednesday 14th April 9:15pm
Road to Roubaix Documentary which celebrates one of the cycling world’s most epic races. Rare behind-the-scenes footage, interviews, and photographs are combined to capture the brutal and unpredictable landscape of the race, the beauty of its surroundings and the infamous cobblestones which serve as the star of the film
www.masterlinkfilms.com/
Tuesday 20th April 8pm (not 7:30pm)
Flying Scotsman
The remarkable true story about the turbulent life of cyclist Graeme Obree, who built his own bike out of washing machine parts and rode it to gold at the world championships. When his beloved bicycle shop went bust, Obree had neither the money nor the sponsorship necessary to realise his dream; to compete at the highest level of world cycling. He faced years of gruelling preparations but with the unwavering support of his wife Anne and the help of his close friend Malky, he never gave up

An action sports documentary showing the best of Ireland’s downhill mountain bike riders. Break the Cycle gives an insight into the lives of these bikers whilst showing off the amazing scenery and trails that Ireland has to offer.
http://breakthecyclefilm.com/

EVENTS IN THE GALLERY (FREE)

All events in the Gallery are free but please book your tickets in advance to avoid disappointment.

Thursday 22nd April 8:30pmFreedom Riders
A beautifully shot look at the evolution of trail riding in America. Freedom Riders follows a small group of riders who evolved from covertly building rough and unsustainable trails, to creating some of the best Freeride trails in America.
www.freedomridersthemovie.com/

Tuesday 13th April 8:30pm
NWD 10: Dust & Bones
Witness astonishing back flips and throw downs in this final chapter to the New World Order series. The follows some of the top freeriders, dirt jumpers and slopestylers in the world as they travel the globe and pull off unbelievable stunts.www.nwdfilms.com/new
Monday 19th April 7:30pm Dave Horton Getting people onto bikes: pleasures, problems and possibilities
Dave's illustrated talk will draw on research he is currently undertaking, as part of a major project funded by the Engineering and Physical Sciences Research Council,'Understanding Walking and Cycling'. In this work, Dave is talking to many different people across 4 English cities (including Lancaster) about cycling, exploring how (if at all) they incorporate cycling into their lives, and moving with them as they make journeys by bike.
He'll summarize what he's found out, so far, about the reasons different people cycle, the things which stop other people from cycling, and what needs to change to really get Britain on its bike. Dave's a sociologist, based in Lancaster Environment Centre at Lancaster University.
http://thinkingaboutcycling.wordpress.com/
Saturday 24th April 1pm  Family Bike Repair Day
Come along and find out how best to take care of your bike from keeping it clean and well oiled, to checking your brakes and tyres. Hands on puncture repair sessions and more.
Thursday 29th April 7pm   We're all going on a … cycling holiday

Wondering what to do and where to go for this year's holiday? Why not try a cycling holiday?
Following last year's very popular format, local people, young and old, who've particularly enjoyed a cycling holiday - some in the UK, some overseas, some travelling solo, some as a family, some pedalling gently along flat traffic-free routes, others undertaking the challenge of a lifetime - will show their favourite photos, describe their routes, and pass on their suggestions, energy and enthusiasm. You'll go away with practical ideas, tips and advice on how to holiday successfully by bike. And, if you came last year, this year there'll be a whole new set of experiences to entertain and inspire you.
By the time you leave the Dukes, winter will seem a distant memory and you'll be raring to pedal off on your own cycling adventure.
Brought to you by Dynamo - Lancaster and District's Cycle Campaign www.lancaster-dynamo.org.uk/

Do you/could you commute to work on your bike? Support an initiative to encourage more people to cycle to work. The BikeTrain will run from Staveley to Kendal, Kendal to Staveley and Staveley to Windmere, departing 8am, returning at 5.15pm, on the third Friday of each month, starting Friday 23rd April 2010. For more details on Start/Finish locations and to download a leaflet go to:
http://www.staveley-gti.co.uk/cycling.shtml#cycletrain   or phone Ruth Jennings  822165  info@staveley-gti.co.uk
Posted by Neil at 3:56 pm 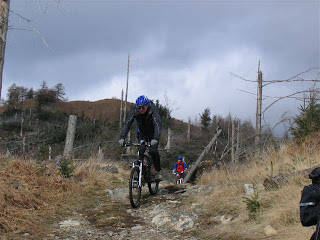 The ride was originally to be part of the Flora of the Fells Festival, but due to lack of interest  Bill extended the ride and make it into a worthwhile weekend club off road ride.  The ride started from Ambleside St Mary's Church, then went through the park onto the under Loughrigg road,  to Rydal. The flowers were out in Dora's Field, then a quick look at the Mawson Garden and Hydro Electric scheme at Rydal Mount. From there back on to the route up past Rydal caves, along the terrace and onto the Red Bank road. Down to Skelwith (coffee at Chesters) and along the unsurfaced, but beautiful route 37 to Elterwater. Onto Colwith road, but soon turning right up the long rough uphill and down to Little Langdale. Over the river, past Stang End and Hodge Close, crossing the main road and climbing again up Arnside Intake. A new bridleway was made here which will take us down from Iron Keld, joining the narrow surfaced road past Bull Close and down hill all the way to Skelwith. Back over Loughrigg Fell and down to the start . Distance is about 20 miles.
Click here for more photo's of the ride
Posted by Neil at 4:29 pm 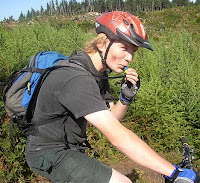 The Challenge is a timed mountain bike ride starting and finishing at the Mill Yard, Staveley and covering the Longsleddale, Kentmere & Troutbeck Valleys and taking in Garburn Pass.  It is organised in memory of Sam Houghton, a keen mountain biker who sadly lost his battle against cancer and died aged only 22 in May 2006. All proceeds from this event will be donated to Cancer Research UK.

The event will take place on 12 June 2010, with start times between 11.30 and 13.30. After the event presentations take place in the Hawkshead Brewery beer hall in Staveley Mill Yard from 19.30, followed by a post-race bash with a live band.

In 2009 the event raised over £9500 for Cancer Research, great effort from everyone who took part.

More details and entry form are on the new website, now up and running, the address is www.samhoughtonchallenge.co.uk
Posted by Neil at 10:53 pm

The KDCS Slides Night main speakers will be  Ian Jones  - Cycling in Tibet, and Dick Brown: Cycling in Cuba.  At The Duke of Cumberland, Appleby Rd, Kendal at 7.30p.m. on Thursday 15th April. As before there will be a few sandwiches and chips available on the night. As the room is free we are expected to buy a few drinks on the night so please come prepared to help out with that duty. Anyone else wanting to show a few pictures or talk about anything please let Andy Mason know.

Mark Beaumont Tour - The Man who Cycled the World

The Man who Cycled the World is the remarkable story of adventurer Mark Beaumont. In 2008, he broke the world record for cycling solo around the world, an epic journey of over 18,000 miles, cycling 100 miles per day for over half a year. In 2009, Mark set out on his second ultra-endurance solo challenge; to cycle the length of the American Cordillera. On this 13 000 mile expedition, Mark will not only be cycling down the longest mountain range on the planet, but will also be climbing the continents two highest peaks, Mt McKinley in Alaska and Aconcagua in Argentina, making his second self-filmed documentary for BBC1 - The Man who Cycled the Americas.

The Man who Cycled the World is Mark’s story of his adventures, a personal rollercoaster of mental and physical endurance as well as a fascinating insight into the world we live in. 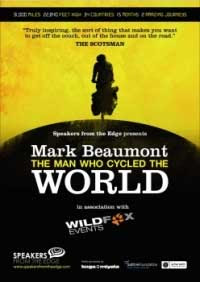 "Truly inspiring, the sort of thing that makes you want to get off the couch, out of the
house and on the road."
- THE SCOTSMAN

“A true man of the world
- DAILY MAIL

In March 2010, Mark Beaumont will be setting out on a tour of 38 venues around the UK with his show The Man who Cycled the World, presented by Speakers from the Edge in association with WildFox Events.  The tour is also kindly sponsored by The SaltireFoundation, Koga Miyata and Active Earth.

The KDCS gallery has now moved from the website to a flickr site, so that it’s quicker for members’ pics to go straight up after a ride. If you have photos from a recent ride, just email them to me, giving us a date and title for the ride (and a caption for each one if you like), and we’ll get a selection of them up into cyberspace so that people can find them from this blog or from the website. To have a look at the new gallery, just click here. Recent ride reports are also very welcome for this blog, of course. Please send those to Neil. Thank you!
Posted by lois at 11:18 am 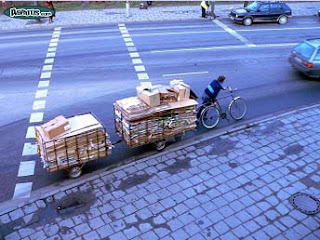 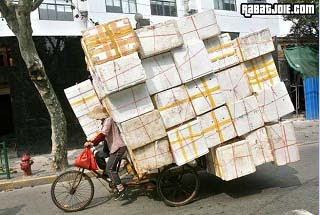 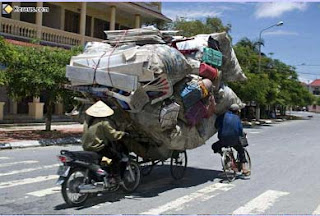 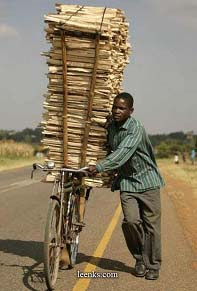 Thanks to Dick Brown for these four pictures - it makes our cycling seem easy.
Posted by Neil at 11:36 pm

Those plastic toothpaste tubes, some have a thin metal inner, or a plastic milk carton; when cut into squares and oblongs, can get you home if you are unlucky enough to get a split in your tyre casing, place one between the inner tube and inside of the split tyre. You will that they prove to be very strong, will allow you to inflate a split tyre to quite high pressure to get you home. Just make sure that you have a few in the repair kit on your bike.
Posted by Neil at 11:06 pm