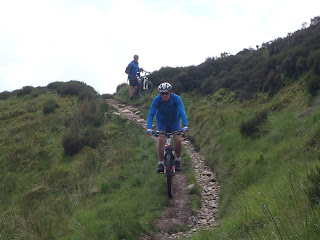 I used to look forward to seeing a ride report, especially if I was unfortunate enough not to have been on the ride. The MTB rides have now been taking place, every week for over a year, I thought it might be interesting to those who are unable to come on these rides, to hear what goes on. I think I can speak for all the regular riders, in saying that it has been a super year, every ride has been a great success, we have had some really exciting days out. You can see from the rides list that we start rides in South Lakeland, but do get over to the Dales and Shap Fells on occasions. In total we have had 52 rides, including one Sunday ride on 26th Feb, one ride planned for Whinlatter had to be cancelled due to a severe weather warning, in fact the road to Keswick was closed due to flooding. We also entered a team of four in the Sam Houghton Challenge and two expert riders went independently, but six in all, the same riders also entered the Dean Barwick Challenge. We did not win any medals, but they were both great fun, and the food and party atmosphere afterwards were excellent.

I could not possibly report on each ride, but will mention a few that have been especially memorable.


The High Cross ride in February, was on one of those rare clear frosty mornings, some icy patches and a sprinkling of snow on the trails, we headed south towards Low Parkamoor with a fabulous view over Coniston Water and The Old Man of Coniston, the air was crystal clear, with deep blue sky reflected on the surface of the lake, We stopped on the sky line to take some photos, then continued down the rough track to Nibthwaite, eventually to start a long climb up to High Ickenthwaite. We sat on some logs for a lunch stop and whilst there, were able to watch a Red Kite circling above us in the clear blue sky, it was a magical moment. We continued the ride over to Satterthwaite, then Bogle Crag, to come eventually to Hawkshead Moor and back to the start point at High Cross, about 25 miles.

We had a fun day out at Whinlatter Forest back in April, I think there were about six riders, and we went to try out the Quercus trail at 7.5km, and Altura trail at 19km, the Altura is a red rated ride and climbs way up over Keswick and Bassenthwaite to 1600ft. Both rides feature, Berms, Jumps, Rock Features, Skinnies, Cork Screws and Table Tops, Obviously there was a lot of hard work in climbing these, but the ride down was a real thrill. It was an exciting departure from our normal day tours.

June 14th saw us going up to Keswick again, this time for a round tour of Skiddaw. We parked free at Brundholme, then took the old railway track up to Threlkeld, this was where the climbing started  up past the Blencathra Centre, then more up and along the side of Blease Fell, crossing Glenderaterra Beck and on up to Skiddaw House, this is a hostel / refuge , with no road for miles. It was a perfect day and we made a lunch stop here. We then continued on the long rocky Cumbria Way to Mosedale, here to find a short stretch of tarmac to take us north before joining the old mining tracks on West Fell. These were good unsurfaced tracks and took us close to Branthwaite, high up on the fells, with fabulous views over Hesket Newmarket, way below, and the Solway in the far distance. 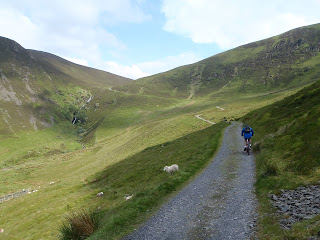 We continued on, past Over Water Tarn to Orthwaite, then started the long steep climb up the track past Whitewater Dash waterfall, and eventually back to Skiddaw House. By this time it was starting to get late in the afternoon and time for us to start heading back to Keswick. The trail back, clings to the side of Lonscale Fell / Skiddaw, with a mega drop off on the left of several hundred feet, but marvellous views over towards Blencathra. The trail is very rough in places and with such a dangerous drop was too risky to try riding the severely damaged parts of track, and we had to push in a few places, eventually the trail softened and we enjoyed a long exciting descent down to the start at Brundholme in Keswick. The mileage for this ride was 34 with 5,300ft of ascent. Funny how you don’t feel tired until you stop. Route from MB magazine.

Aug 23rd, saw us meeting at Ingleton, for a tour of Ingleborough. We headed out on the old road to Clapham, through the tunnels and then the long climb via Trowgill up to Sulber Nick. This was a good place for lunch with fantastic views south over the Limestone outcrops and wild open moors. We then continued through Ingleborough nature reserve on the same track, eventually dropping down to cross the River Ribble, then heading north to join The Pennine Way and down the old Roman road to Ribblehead. Here we had a cup of tea in the pub, before crossing under the viaduct and heading north to Winterscales, started to rain at this point, but we continued on heading south west to Ellenbeck and the trek across Scales Moor. Lots of open pot holes and Limestone pavement but no real trail to follow across here, we eventually arrived at Ewes Top (1200ft) before a fabulous descent down Twisleton Scar and back to Ingleton, about 30 miles. Steve guided this ride.

Well, I guess that by now you have a fair idea of what the mountain bike rides are about, as a rule we do not have a ride leader, and simply agree a route before the start, only takes a couple of minutes. However these guys are so keen that they are now subscribing rides, and leading them as well, if you look at the Nov / Dec list you will see that five rides were subscribed. 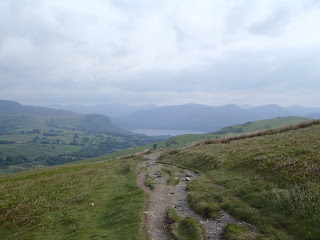 It has been a memorable year, and I would like to thank the regular riders for their support. Neil, Mark, Steve, Chris, Malcolm, Tim,  Andy and Peter. There is never a dull moment, Steve keeps us going with his jokes and stories, and Neil fixes the bikes when they break. Neil says we are like the last of the summer wine on mountain bikes. I have a short MTB ride coming up on the 11th November, so try and get hold of a mountain bike and come along for some fun and hard work. How about some road ride reports?

Details from Chris Rowley about his ride next Sunday -

If the weather is poor this will be a hard ride of almost  50 miles with two long climbs.  The hills are quite exposed to the weather.   Please meet at High Bentham free car park ( 688694) at 10.00am.  This car park is behind the north side of the main street and can be accessed from Goodenber Road which leaves the west end of the main street.  It is signposted from there.
If you have any difficulty finding this my mobile number is 0777 456 1947.

The Route.
We ride south from High Bentham across Lythe Fell to Slaidburn  (The Hark of Bounty does morning coffee) and then Dunsop Bridge (Puddleducks Cafe will be open)   This may be a little early for lunch and, since there is nowhere else till Woodies at Caton, sandwiches might be a good standby idea.   After the Trough we ride north past Abbeystead and the Jubilee Tower to Caton.
There is a teashop at Bridge House Farm Wray which we could investigate if we decide not to deviate to Woodies at Caton.  Wray to Low and High Bentham will complete the circuit.

Bill Jackson has given us full details of his ride next Sunday. Here's hoping for decent weather...

The ride leaves Ambleside, over Rothay Bridge and on to Clappersgate, Lake Windermere to our left (1) here turning left and heading out towards Hawkshead, but again left at Outgate to take the road to Low Wray, and Wray Castle. The Castle is now open and has a cafe, it is a chance to see inside, so we could make a stop here, if riders would like this. Leaving here we head through High Wray with views over Blelham Tarn (2) and on to Colthouse and Hawkshead, Esthwaite Water (3). We can make a coffee stop here, but don't eat too many cakes because we have a big climb ahead up Skinner Lane and old Hawkshead Hill  to Tarn Hows.(4) If anybody wants to avoid the steep climb from the top of Hawkshead Hill to Tarn Hows they can do so, by continuing on the B5285, we will meet up at the bus stop outside Hollands very nice cafe for lunch in Coniston. Coniston Water to our left. (5). The bus stop is covered in and has a seat for those with a picnic. The ride leaves Coniston on the A593 heading north through Yewdale and soon  passes Yew Tree Tarn (6) before a steep climb to the top of Oxenfell, descending, we take the left turn for Colwith and on to Elterwater (7). There is another opportunity at the Colwith turn to shorten, by continuing on the main road to Ambleside, this would miss out the Elterwater and Grasmere loop.  At Elterwater,  there is a choice of route to Skelwith Bridge, The most scenic is to follow route 37 alongside the River Brathay, but it is unsurfaced and shares with walkers, even so, I would recommend this, most tyres seem ok with the surface and it is a beautiful stretch to cycle. At Skelwith Bridge we meet up with anybody who opted for the main tarmac road. (The route can be shortened here by taking the main road back to Ambleside and missing out the Grasmere loop.)  Leaving Skelwith we turn left at Ellers and start the climb up Loughrigg Fell, soon turning right to follow the loop around Loughrigg Tarn (8) again, this bit is unsurfaced but ok for most tyres. Soon to join the narrow road and continue on over Red Bank to Grasmere (9)  over White Moss and down to Rydal (10). We then turn right over Pelter Bridge and continue on the quite road under Loughrigg Fell back to the start.

Many of you have done this ride with me in the past, but for the benefit of riders new to it, it is never a quick ride and is always ridden at a leisurely pace with plenty of stops, it is very hilly with at least one 25% also two very steep 25% descents from Tarn Hows and Red Bank, which should be treated with great caution depending on the weather and traffic. All we need now is a nice crisp day with some Autumn colours.
Posted by lois at 2:08 pm