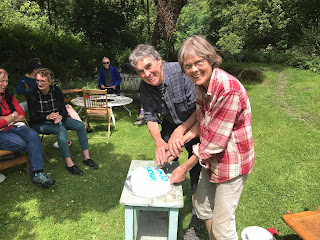 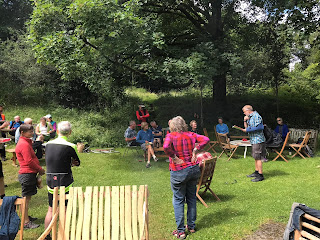 I would like to start by thanking you all for joining us today here at Sprint Mill and as ever many thanks to Edward and Romola for hosting this important event.

Just in case you weren’t aware - today we are gathered to celebrate 30 years since the inception of KDCS. What do I mean by inception? Well 30 years ago several founder members attended a Friends of the Earth meeting where the attendees were asked how they felt about the formation of a cycling club in Kendal that would support the same principles and benefits we have in the club today. As you know these include amongst others health, social and environmental benefits.

After the attendees agreed to go ahead a series of meetings were then organised with a view to forming a cycle club, organising regular cycle rides and to campaign on all things cycling. It was our very own Edward Acland and Simon Rose who germinated the proposal at that Friends of the Earth meeting with support from other attendees. From this the first meeting of what would become KDCS was held on the 17/11/1992. The first rides actually took place in 1993. But although it may seem that we are a little premature in our celebrations the club was actually founded in 1992 - 30 years ago.

The aims of the group were to include working with the relevant authorities to try and develop a safe network of cycle paths in and around Kendal for the benefit of all.

There was an emphasis on the benefits of cycling which included health and the environment. Giving people the opportunity to make short journeys to work, for shopping and leisure and so on was surely a good thing but it needed to be done in a safe environment. Traffic in Kendal even at that time was pretty bad. Many of us will remember walking to school when traffic was a lot less in most towns but many of today’s kids get lifts to school because of time, safety and a lack of off-road routes. KDCS aimed to improve that and in addition through a series of doctor bike sessions at the birdcage and Gooseholme provide very cheap cycles for families to purchase as well repairing bikes gratis. Many hours were spent doing up old bikes to facilitate this and for a long time Edward housed lots of old bikes here at the mill.

KDCS as a club originally charged £5 membership and after generating funds even used some of it to provide bike racks in Kendal. We also campaigned to get the old canal path trail behind the leisure centre resurfaced to make it more user friendly (previously the sandy surface ruined clothing and bikes when wet ).

Once the rides list was compiled for the leisure side of the club regular rides commenced from 1993. The comprehensive programme of rides we have today is the result and the more modern twist developed the mountain bike offshoot which now has well over 50 members. Easy Tuesday rides were another progression to provide organised opportunities for people to ride after work with a seasonal programme set out for all to view.

We even had at one point t shirts printed with our own logo and some of our members still have them. They weren’t lycra though. We had a regular newsletter delivered by bike to members across the area before e-mail made life easier. Feel free to look at some of those old documents that Edward has put out for viewing and take a trip back in time. An article appeared in the Westmorland gazette back in the day and Simon still has a copy in his folder from all those years ago.

We have a committee, a website, rides and social events such as this from time to time. We even have a cafe of the year award. Covid temporarily put a brake on everything but Dave Wills organised zoom meetings to keep things going during those dark times and this year we are now back with a bang.

We are however a club where many members are how shall I put it - in the more mature age group and if we are to enjoy continued succession, we need to attract younger members and families. We will never compete with the 700-member Kendal cycling club as we are a completely different type of club offering leisurely and sociable rides over a wide area. Mark Bazeley developed over 50 rides for anyone to follow and these are on our website. We aim therefore to be very inclusive to all whether they are members or not.

Again, in these modern times we have the website and 2 Facebook sites for members to enjoy and post articles, blogs, photos etc. We continue to attract new members albeit small in numbers.

I would like to end this short speech by thanking those founder members for having the vision and foresight to form a club that is still running 30 years on, the members for supporting us, the present committee for the work they put in to keep us running and Dave Wills for organising this event today. Finally, a big thank you to you all for keeping the dream alive by coming here today and to those that took advantage of today’s ride which I hope you enjoyed. Please enjoy the food, the music, the chat and the surroundings and remember you can volunteer to lead rides and join our committee as we always welcome and need help running the club. Indeed, why not think about becoming chairman / chairperson or my particular preference chairwoman to replace me with a dynamic leader to take us into the next decade.